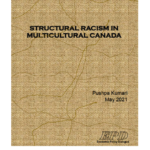 The present study looks into racism in multicultural Canada. It examines the factors which have been making the nation increasingly multicultural demographically. It analyses the education, employment, income, and poverty outcomes and finds how racism has played a huge role in the performance of these structural factors. The aboriginal population seems to pay the highest price for their aboriginal identity in terms of the worst education, employment, income, and poverty outcomes. Then follows the visible minorities who are observed to pay the price for their color and (non-Caucasian) race in terms of worse employment, income, and poverty outcomes; this is despite their better performance at university level education than all other population groups. The vicious trap of lower outcomes for the racial population is no accident; it can relate to deliberate, unfair, and discriminatory actions of the white majority population who generally own and control Canada’s institutions. 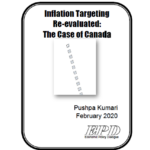 The present study re-evaluates the inflation-targeting monetary framework in Canada with a broader perspective by analyzing its impact on the real economy, macro economy, and financial economy rather than typically the performance of the inflation rate alone. It establishes that under this framework: Canada’s real economy has seen lower rates of domestic investment and GDP growth besides higher rates of unemployment; macro economy has experienced low inflation by virtue of cheap imports, aggregate demand sustained with the unsustainable debt levels, and the economic structure overwhelmed by the asset economy. The study concludes that the ‘so-called’ healthy system of inflation targeting is meaningless in an unhealthy economy, especially when it is among the contributing factors. This re-evaluation exercise leads to the obvious question for the Canadian policy-makers: whether macroeconomic, financial, exchange rate, employment, industrial, or social stability is less important than price stability? 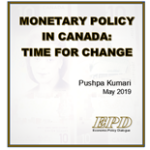 Present study questions the role of monetary policy in general and inflation targeting in particular with the help of important issues related to it and concludes that it is high time for a change. An irony of the inflation targeting is that price stability has amazingly been achieved in Canada simultaneously with an over-leveraged financial system and an over-exposed economy to the debt and assets. And also, the low policy rate regime under the framework has not been able to stop the investment from decline and the real economy from stagnation. 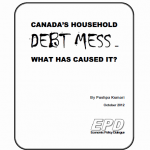 Canada’s Household Debt Mess – What has Caused It?

This study finds that several factors at macro and financial sector level are responsible for the households’ debt mess. Debtors can be blamed for borrowing too much, however financial organizations are also responsible for lending that much, and above all the government and regulatory authorities, too, accountable for letting an excessive borrowing-lending happen in the economy. 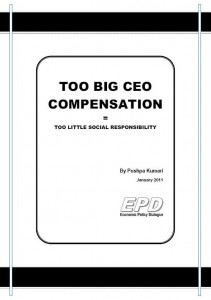 Study finds that it is not only the big amount of the CEO pays, but also the process and the impact, all reflect the socially irresponsible behavior on the part of CEOs.